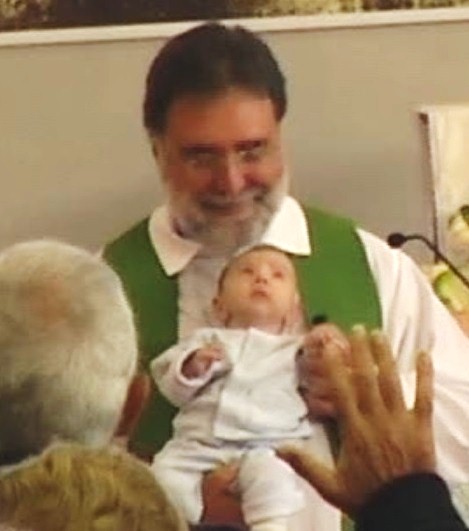 My name is Francesco, I am from Martinsicuro, and I am Giorgio’s grandfather. I feel honoured to bear witness to the Lord Jesus’ works. On 12th August, 2004, at about 2:30 a.m. my daughter gave birth to a baby in the Children's Hospital “Salesi” in Ancona. Immediately he was taken away from her. The doctors said to her: "We’ll bring him back later." My daughter waited for him, instead at about 6:30 a.m. they brought him upstairs and he was put in an incubator. One of the doctors said: "The hopes of survival are almost zero for Giorgio, because he has a lung infection and other complications, and he cannot breathe." Giorgio’ impending future was looking to be bad! We reacted according to the Word that says: "We have a lifeline" (Heb 6,19), and we prayed to the Lord. That was on 13th Friday. On Saturday, 24th August, I returned from “Salesi” to Martinsicuro at about 10 p.m. and I stopped near the amphitheater in front of the chapel of Mother Teresa from Calcutta: there was a prayer (the vigil dedicated to the Virgin Mary’s Holy Assumption). During the prayer of the believers, I asked to pray for the healing of Giorgio. And so everybody prayed for him. The Lord does great things. My daughter said: "Dad, if the disease came for the doctors’ fault, I will not accept it, but if the Lord wanted it and He did it for Himself, then the baby can fly to Him in heaven." Instead, after 5-6 days, the infection was cured. He was out of danger, according to the doctors.

Suddenly, however, Giorgio’s situation was about to deteriorate and doctors had to give him oxygen in 100x100 (more than before) and they said: "Giorgio’s situation is very serious, in these conditions he has got only a few days to live." Prayer was our first reaction. We prayed with Don Marco very much. We went to Loreto, where a group of people prayed and the Lord has heard our prayers. God has really listened to us. I do not know how many people prayed for Giorgio: I think they are really a lot. One day my daughter met a gentleman in Martinsicuro who asked her: "How is Giorgio?". My daughter replied that he was better and he said he had not gone to Mass for many years and he had not confessed for a very long time, but at that moment he had decided to go and pray in the sanctuary of Saint Gabriele for Giorgio. There he confessed and participated in the Holy Mass and he also received Communion. I told Don Marco and he said that Giorgio would be a great tool in the hands of the Lord, and that he had already saved his first soul from hell. One day, behind my house, I was washing something with water in a tub, and suddenly the scene of Jesus on a boat that sank with His disciples came back to my mind (Mt 8,23 to 27). They said to Him: "Lord, save us!" Then the Lord: "You are men of little faith, I am with you, you must not be afraid!". Then I thought about all the path of the Lord. All the works that He did. These things have helped me very much. A few days passed and Giorgio had less and less need for oxygen; 4-5 days ago, the doctors removed all the intravenous feedings that he had.The doctors have never found out what kind of infection had hit him. They treated him with a generic antibiotic, then they tried other 2 or 3 types of antibiotics. But doctors still do not know what kind of disease he had, or which therapy made him heal. The nurses of “Salesi” decided to call Giorgio as 'the little miraculous survivor', because the 'death sentence' has not happened. With the Lord's help now Giorgio is well and I hope that next week he will be among us. I thank the whole community who prayed for him. And I urge you to do even more, because we have to pray for other people who need it. We have to pray much, because there are so many people waiting for our prayers. And we have to pray with hearth.

I want to bear another witness. Many years ago my wife was very ill. She was so bad that, even for her, the hopes of recovery were 'zero'. She had been ill for more than 10 days. She was losing her nails, her hair and part of her skin. One night she dreamed she lived near the expressway exit of Val Vibrata. There is a church with a crucifix of Jesus and Our Lady of Pity on the other side of the exit. She also dreamed that the crucifix in the church fell down on her. Then she shouted: "Lord, I cannot bear this burden." "But you’ll overcome it." She shouted again: "I cannot stand it!". "But you’ll overcome it." She overcame it. Now she has been good for many years, and I have wanted to bear this witness, too, in order to tell that the Lord has never forgotten us.